Partial webinar transcript discussing Rapid Shutdown requirements, how to choose an inverter, and an overview of Tigo Flex MLPE.
Watch the full webinar on demand 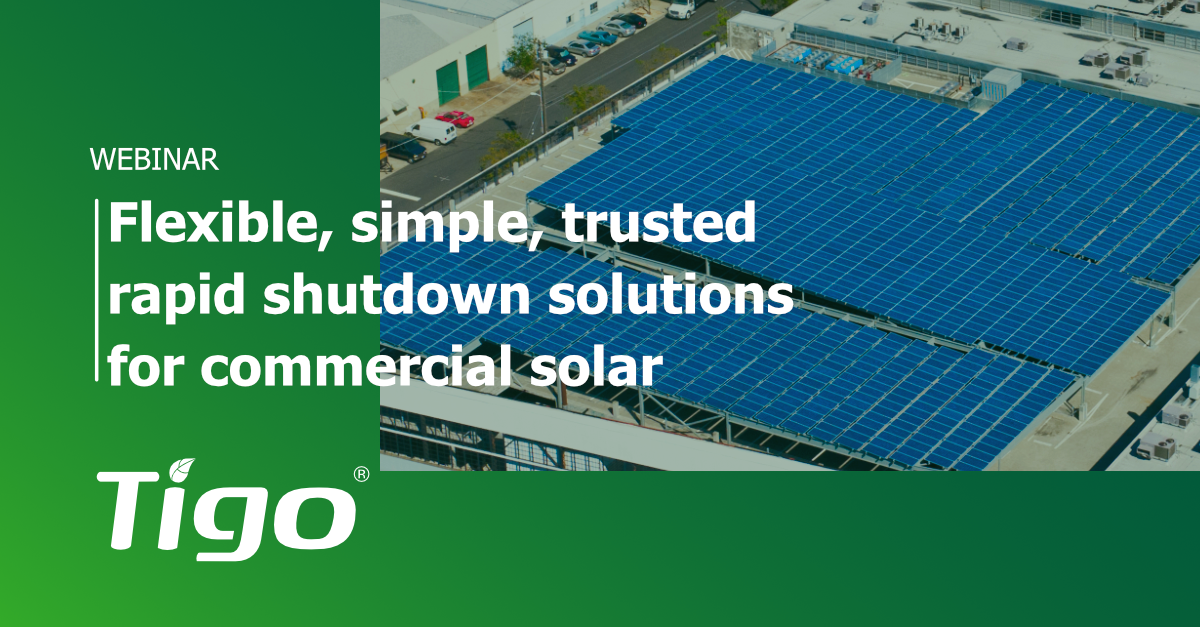 Rapid shutdown is for the safety of first responders or anyone else who has to work around or near the [solar PV] system. The goal is to prevent people from being exposed to high voltage.

The NEC 2017 rules actually mandate module levels. There were earlier rules in NEC 2014 that were pretty much string level shutdown, but those are quickly disappearing.

So, we have those two zones that we have to deal with. Now, one thing about rapid shutdown is that it's really best if the whole system is tested as a unit because the inverter and the module electronics have to cooperate for rapid shutdown to happen because what we really have to do is we have to go from high voltage to low voltage very quickly within 30 seconds.

So, 30 seconds is not a lot of time. And to get that voltage down that quickly requires a kind of cooperative thing between the inverter and the modular electronics. So, they do need to be tested together. That's why we work so closely with our inverter partners to make sure that that testing gets done and that we list with UL.

These requirements are already adopted in nearly all states. And they will be in all states soon – all 50 states are in the process, it's just a question of whether they've completed that process or not.

What projects must comply?

Now this exception, it's a little bit tricky. If you have any conductors that are any part of the system that enter a building, and that building is used for anything other than solar, then you have to comply.

So, let's say you have a car port system, and it has conductors that go down and they just enter this shed and the shed is only used for PV equipment, nothing else, then you don't have to comply. But if you put a rake in there – if that shed has any other kind of equipment in it – if it's obviously going to be used for any other purpose, then it has to comply.

And this particular system (see figure 2) actually did have to comply because the conductors from this system go down through that parking structure and enter a building (like an enclosure) that had other equipment in it as well. So, this project had to comply.

Well, that means that inverter has been tested with Tigo as a system and has been listed by UL. We do this very often, actually. We gettogether with UL and with people from the inverter vendor and we do the testing– they get out all of their meters and their cell scopes and they do this. They've been doing it actually during the pandemic, which is a bit challenging, but it has to go on.

And we all test together. We all make sure that these systems work as designed, that they meet the requirements, and then it gets all of our stamp of approval. And the most important one of course is UL because they are an NRTL (Nationally Recognized Testing Laboratory).

Now UL is not the only in NRTL, but they are the dominant one, and the one that everyone's heard of. Most of the others are smaller players and you probably wouldn't recognize their names, but there are others.

But that's what the NEC mandates – that equipment used for rapid shutdown must be listed with a nationally recognized testing laboratory. And of course, Tigo chooses UL because they’re most recognized, they're just a household kind of name. But that's what it means, that's what has to happen, and that means that those systems are PVRSS certified.

There's also this equipment listing that UL and other laboratories does. That's just like your toaster, if you get the box from your toaster, it'll have a UL label on it. So, individual devices like a toaster, or like a Tigo TS4, they get an equipment listing and Tigo TS4 has got that listing too, but it's different. That just means that that particular device has been tested and has been found to be safe.

Also, it bears mentioning that the NEC is published by an organization called the NFPA, the National Fire Protection Association. That's what all of this is about, right? It's about fire safety. So, don't ever forget that because if you're ever tempted to think any of this as a hassle, just realize that it's all about fire safety – it's all about preventing fires. We all want to be on that bandwagon.

Figure 4 shows an example. So, we have modular electronics, in this case we're showing our dual unit – so, two modules connecting to this one device in this case.

Now this transmitter can be either standalone, we sell a unit standalone that you can install, or it's built into the inverter. And obviously if you switch off AC power to the inverter, then the transmitter gets switched off. And then the whole magic happens for rapid shutdown.

So, it's not terribly complicated and that's why we sell a device that only does rapid shutdown, because if that's all you need, if all you're looking to do is comply with the requirements, it’s very simple, very inexpensive.

Figure 5 shows a very small part of our PVRSS certified list. You would have to keep scrolling for quite a while to see the whole thing, but you see the first part of it there. You do see a list of all the manufacturers on the left-hand side that are reflected in that list. And also on the list, it shows which TS4 versions are UL listed with which inverter.

And this is the list that I strongly encourage everyone to check out and look at first when you're designing the system so that you know, if you're planning to use Tigo, which inverters you can use.

And I'll say for fire safety, it’s particularly important to choose an inverter that's been well-tested. So, for example, our optimizers and our safety product, TS4-S, they'll work with just about any inverter that's MPPT based. There are a few exceptions, but very few. But fire safety uses PLC. And I would say just with any product that uses PLC, you want to make sure that the inverter is going to be compatible with that product because PLC can cause issues with inverters.

So Tigo also has a new branding that's called Tigo Enhanced. I say new butit's been around for a few months, but it may be new to you. You can see the logo in figure 6.

If you see that logo on the datasheet for an inverter or inverter literature, it means that that inverter is compatible with Tigo’s fire safety. Now, again, this is about fire safety and the fire safety devices, the TS4-F.

Tigo’s TS4 product line. It scales from any system to the very small, to the very large. You can add the features that you want to each module. There are some versions of Tigo that can actually be mixed, not all, but some of them can be mixed.

And therefore, you can, for example, put optimization only where you want or only where you need on a system and then just put monitoring and rapid shutdown for the rest of the system.

You can also just put optimization by itself on a system. If you have shading in a corner, for example, you can take five TS4-O, put them in that corner, you're done. If all you need is optimization, you don't need anything else. Obviously, if you want rapid shutdown or if you want monitoring, you have to put in the communications equipment, but if all you want to do is optimize, then TS4-O by itself will do just fine.

Choice of Inverter. So really figure 8 is a lot about what we call solar freedom. Tigo gives you a lot of freedom – the freedom to deploy modular level features exactly how you want, pay for no more or no less features than you need. That's what it's all about. We're trying to make these systems cost effective.

But also, that freedom to choose inverters gives you a lot of freedom. Occasionally companies do come and go. We have sadly seen a lot of inverter companies bite the dust here in the last few years. It's unfortunate, but it happens. And it gives people comfort to know they've got multiple sources for these very important products.

To join in on discussions about solar or ask questions on solar, visit our Tigo Community page. To leave a comment on this blog, click here.

Get the latest Tigo updates
Sign up for our newsletter
Thank you for signing up!
Oops! Something went wrong while submitting the form.